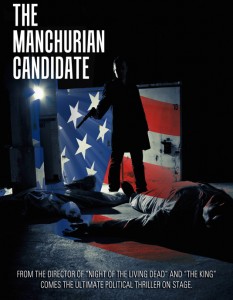 It really was sort of mesmerizing to watch the stage adaptation of John Frankenheimer’s 1962 film masterpiece “The Manchurian Candidate” at the Maverick Theater the other night. I mean the stage is so dinky; and yet somehow this production was so ingeniously staged (including a turntable built into the stage) that the whole thing seemed plausible.

I was in town for a couple days and my husband and I thought we’d give the little theater another try. Okay, Joe kicked up a little fuss, but went anyway.You have to remember, I’m not even much of a theater goer, but I enjoyed writing a review a few months ago and thought I’d give it another try.

I have to admit I wasn’t too optimistic about the play – after all the Richard Condon novel spans two continents and many years, and the Maverick Theater is what, about 25 feet wide? And the movie had left some pretty indelible character images such as Angela Landsbury’s wicked Mrs. Iselin.

The story is kind of simple. Generally loathed sergeant Raymond Shaw and his platoon are captured during the Korean War and become the brainwashed tools of commie masterminds. Later, back in the States, Shaw gets a Medal of Honor for “saving” his troops. This delights his Machiavellian monster mom and Joe McCarthy-like stepdad, Mrs. and Senator Iselin, respectively. Other platoon members including Marco Bennet are having horrible flashbacks and trying to figure them out. The suddenly and inexplicably likable Raymond Shaw is the nexus. And the Reds have something really big planned for Shaw…

As noted above the choreography of story and scene changes was tight and extremely well adapted for the (small) stage. There were even a chase scene! The use of interactive video really helped expand the scope of the mis-en-scene. Congrats to director Brian Newell – a bit of a mastermind himself.

The level of acting performances seemed varied to me. John Brennan, who previously did a boisterous turn as Randall McMurphy in Cuckoo’s Nest is back as the disturbed Marco Bennet and did pretty well, although I get the impression his personality leads him to more expansive and gregarious characters. Marco Bennet is about to really crack-up, and I didn’t quite get that sense of acutely anxious desperation that informs bad anxiety disorders.

Raymond Shaw was played by William Marty in a really hard part. Marty’s Shaw seemed sort of uneven to me: sometimes convincing, other times less so. I would have liked to have seen a more developed early profile of the SOB he was supposed to be. Part of the problem may have been that the script didn’t permit a little more attention to Shaw in Korea, as did the film. His Shaw under the influence was convincing. And of course he did get the best line of the script: “It’s a terrible thing to hate your mother. But I didn’t always hate her. When I was a child, I only kind of disliked her.” BTW, William – remember to work the diaphram!

The other main character, Mrs. Iselin, was played to menacing perfection by Veda Franklin who brought to her role a consistently calm and calculating Lady McBethesque evil that really filled the bill. The touching transient moment between Iselin and her son near the end of the play was deftly and quickly turned to pathological hatred toward her manipulators. Brava to her.

Of the other performances I noted Percival Arcibal’s Dr. Yen Lo, turned with the required nuance of humor, and with a good line about yak dung cigarettes; and Robert Craig did an okay, although sometimes stiff presentation of the dim-witted, red-baiting Senator Iselin. Kelsie Blackwell injected some bouncing feminine effervescence with her portrayal of Jocie Jordan, Shaw’s girlfriend.

Overall, I’d like to see the Maverick casts become more relaxed and convincing  with both their hand work and incidental interaction with props, something I’ve always thought was the mark of the best actors. But what do I know?

Anyway, that’s the summation of The Manchurian Candidate at the Maverick Theater by me, The Fullerton Shadow – amateur critic. As before, take it for what it’s worth. And go see the show. It runs through June 5th. It’s entertaining and at times startling. You’ll have fun.

2 Replies to “Brainwashed at The Maverick”