The Grand Jury has reported on the OCTA’s budget mess and their deficiency in Bus service.  Here is how the report begins:

The mission statement of the Orange County Transportation Authority (OCTA) is a masterpiece of brevity and focus:

“Our mission is to enhance the quality of life in Orange County by delivering safer, faster, and more efficient transportation solutions.” 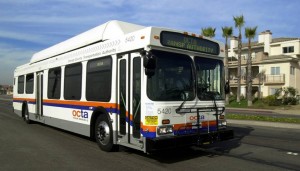 The report identifies how the OCTA had the right idea when it cut bus services and raised fares by calling the action prudent.  Then later the report notes that the rise in fares had negative effect on the ridership.  Ergo, we must lower bus fares but only after full state funding is restored.

The report also calls into question competing priorities with the federal handout of $2.25 billion for high-speed rail and the $143 million set aside for the Anaheim Regional Transportation Intermodal Center, which the City of Anaheim is not contributing to.  The Grand Jury points out that OCTA needs to review its priorities with these funds.  The Grand Jury says that the “governmental relations committee of the OCTA Board should urge Orange County ’s congressional delegation to lobby for legisla­tive modification of the $2.25 billion.”

The final recommendation by the Grand Jury is for OC’s political and transportation leaders to hold a series of public meetings, the goal of which would be aimed at creating a countywide transit agency that will have sufficient au­thority and funding to overcome parochial­ism in developing a modern transit system.

I love this gem from the report:

One member of the transit agency’s board char­acterized the economic impact this way: “The busi­nesses and industries in Orange County that depend on low-income workers would grind to a halt.”

It would appear that we taxpayers subsidize bus service (to the tune of more than 80% of the total cost) so that low-income earners can keep their low-income jobs which helps keep low-income employers staffed with low-cost employees…  Ergo, you and I subsidize burger stands, Walmarts, and rich people with nannies and maids.

7 Replies to “A Masterpiece of Brevity and Focus”