Le administrateur asked me to respond to Dan C’s tirade on The Liberal OC in regards to Shawn Nelson’s cigar largess to the troops. As Gustavo wrote, “this is one of the worst argued posts I have seen in a very long time”. It would appear that Dan C. failed to do any research, choosing to write a hit piece rather than an article. Had he done so, he would have found out that cigars are just an addition to the snacks and other useful items being sent by Mr. Nelson. Let me address Dan C’s tirade against sending tobacco products to the front line.

While smoking is a recognized issue by the medical corps, there are many more things that can easily kill a soldier, airman, sailor or Marine while in theater. IEDs, mortar and small arms fire, vehicle rollovers, helicopter or flight crashes to name just a few. Hence, the combat theater isn’t the easiest place to start a smoking cessation program and be successful. Soldiers, airmen, sailors and Marines smoke for a number of reasons –because their peers are doing it, it helps them blow off stress, and also to pass the time between waiting and combat.

Once they are CONUS, the military can and often does start in on smoking cessation programs, which also includes insidious chewing tobacco. Any form of smoking or chewing tobacco contributes to a variety of smoking related diseases and ailments. Because they will have their health needs covered by TriCare or the VA, smoking cessation programs are essential. Our challenge as a nation is to help our military heroes cope with physical, emotional and stress related issues (including PTSD) by offering alternatives to smoking through array of integrated therapeutic venues. This is the focus for the next 30 years for the veteran and veteran support communities.

My suggestion to Mr. Nelson and others is twofold:

1. Continue sending things into the combat theater, and encourage others to do so too. I’ve prepared a document called Troop Support For Newbies available through my blog, The Kitchen Dispatch. TSFN has been widely shared across the nation, among families, troop support organizations and through the military ranks. In addition, for those on a budget: the thing soldiers like best are letters! FYI, The Boys and Girls Club Teen Center on Richman completed a letter writing campaign last spring. Their letters were sent to Afghanistan, where a chaplain picked them up and delivered them to soldiers in a remote outpost (see photo). Consider rewarding these young patriots with a big fat check for upgrades on their kitchen. 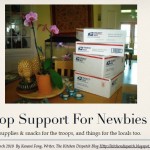 2. Give to veterans programs that work to help a soldiers well-being after he or she returns home. Several excellent programs run by private non profit organizations may be found on my blog. This post ran last week, and made the rounds of both the military community and up the ranks: The Kitchen Dispatch: Getting Rid of Mental Health Stigma. Many of us work together –regardless of differing viewpoints on war, or politics to ensure a veteran at all stages of life is supported with dignity. Those who volunteer for the military constitute less than 1% of the population.

Supporting the troops goes far beyond sending things to the front line. For many, the real battle begins when they are home. Nelson’s support is always welcome, and we appreciate that he keeps the men and women who serve in mind. Should he need to contact me directly, the best way to do this is through Fullerton’s Future COC.

12 Replies to “A Closer Look at Nelson’s Package”