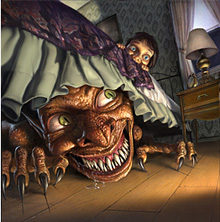 One of our Friends just returned from a mind-dumbing tour of the red county blog where she came across these comments on a post about another life-like Sheriff candidate or other:

Let’s see if we’ve got this right. Some unknown commenter says something to annoy Cunningham and suddenly he claims it’s one of us! Too funny. What’s even funnier is that he claims we have a fluid “Koran” as the basis of our blog. Poor, dumb Jerb still doesn’t get it. We are not a partisan political blog. We want our electeds to act responsibly and with accountability. It’s only in the sad, slimy precincts of Red County where political party principles are supposed to hold sway. But of course they don’t.

Mr. Cunningham clearly needs professional help. And being the generous and big-hearted folks that we are at FFFF, we have once again retained the services of the renowned psychiatrist, Dr. Reinhold Ott, of the Schwabian Institut fur Psychologie in Tubingen, Germany, (at our own expense) to analyze Mr. Cunningham’s problem.

Although the information provided about this case is necessarily sparse, there is enough background material one may discover searching your blog to reach some conclusions, albeit tentative ones.

The subject has fairly obviously attained a mid-level of paranoia that is likely the result of unresolved id/superego issues that possibly extend back into childhood.

Being involved in politics as a fringe character has no doubt heightened a sense of impotence that exacerbates an underlying suspicion that the subject is a minor functionary, a mere tool if you will, in a large machine whose operators control him and many others like him.

The guilt/anger tension of suspecting to be manipulated will intensify the paranoiac delusion, as will the destructive underlying emotional attachment to the manipulators – yet another issue that likely reaches back into early stages of personality development.

In this case the subject lashes out at evidently disconnected or irrelevant targets while the principal cause of torment goes unaddressed. Such behavior is likely to continue until the underlying issues are resolved in a satisfactory manner.

Geez, thanks, Doc, I guess. Looks like this problem’s not going to be fixed anytime soon.