It’s bad enough that the City of Fullerton has always shown a penchant for fake old, with its attendant brick veneer and styrofoam cornices. Sooner or later we may actually come to accept this affront to taste by the bureaucratic boobeoisie. What really adds insult to injury, however is the cavalier way that modern architecture is treated by the City. By “modern’ we really mean functional, original architecture that encloses space creatively that employs abstract patterns, uses modern materials, and that expresses its structure in its outward appearance. 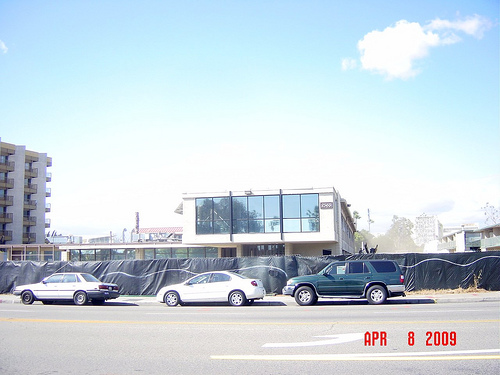 What really bugs us was to watch last year’s “Jefferson Commons” abomination approved unanimously by the City Council. Bad enough was the proposed monstrosity; we’re used to architectural crap. Even worse was the propsed demolition of three mid-century modern gems on Chapman Avenue without so much as a backward glance. 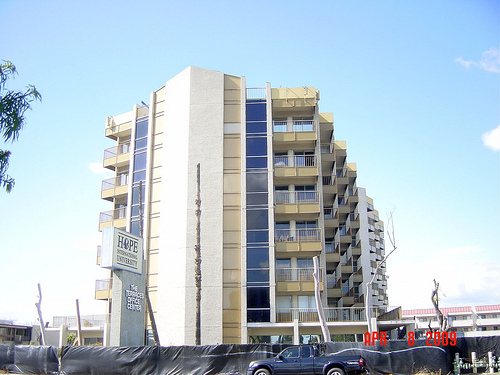 So why do we bring this up again? Last night the Council voted to extend the permit deadlines for an additional two years since the new developer (the old one already bailed out) can’t get financing. Several speakers pleaded the case that the buildings in question have historical merit that was not recognized by a faulty CEQA process (wow, no surprise there!), and that demolition should be postponed at least until a final project looks like it could start. These seem like a pretty prudent path to us.

Why these buildings were not originally identified as historic resources is not hard to explain. The City ignores anything not listed on their register of significant buildings; that accomplishes the bare minimum of CEQA requirements, but doesn’t say much for the integrity of the process. The out-of-town lobbyist had done a good job of spreading around the wealth and the buildings never stood a chance. Meanwhile, Fullerton’s Heritage group, that should have been raising Holy Hell, was apparently too busy putting brass plaques on things and telling NOCCCD administrators how much they prefer fake old to modern architecture.