The Laing of the LLC is John Laing Holmes. Laing is a home builder with a reported debt of $500 million to $1 billion and is in Chapter 11 receivership. And furthermore, the word on the street is the front men of the LLC Hamm & Pellican are also on the verge of financial protection.

Exactly what kind of negotiations could our financially unexperienced City Council be doing with a group of financial wizards who are running amok in debt? When is the Redevelopment Agency going to realize the housing market has collapsed? If this project goes forward it will be a financial wreck for Fullerton.

Dear Friends, how many of you realize Pam Keller, Sharon Quirk, Don Bankhead and Dick Jones have already voted to place the Fullerton tax payers on the hook by guaranteeing the developer who’s in bankruptcy a 15% profit?  Who besides us are willing to admit this project was a turkey from day 1? 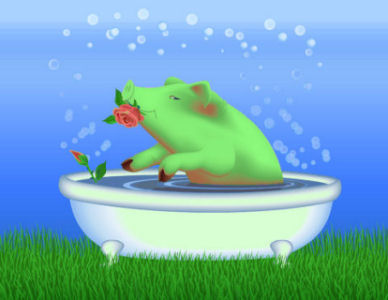 Just in case any objective person needed more evidence that the basis of the Fullerton Redevelopment Agency’s proposed land-grab is unadulterated hog wash, we share a letter from an individual whose property is currently within the proposed boundaries; and of course we include a copy of the response from the City.

In his letter to the Agency, longtime Fullerton resident and businessman Mr. Paul O’Neil of AEROMARK, provides a rather comprehensive indictment of the entire expansion process and its ultimate conclusion of “blight.” He concludes his letter with a request to have his property deleted from the project area. In response Agency Director Rob Zur Schmiede agrees that the property can be excluded because it is near the boundary, because it not necessary to further the goals of the project, and because Mr O’Neil wrote a letter!

Well, Mr. Zur Schmiede’s missive begs several pertinent questions that go to the very heart of the Agency’s competency and honesty in this whole matter. First, if the property in question is on the edge and not necessary, why was it included by the City’s “expert” consultant in the first place? Second, why does the fact that Mr. O’Neil wrote a letter asking to be removed have any bearing on the supposed “findings” necessary to include it? This response gives every indication of being nothing but a way to shut up potentially vocal opposition to the expansion by an obviously informed, and unhappy property owner. If the mere fact of “writing a letter” is a germane to exclusion of a property, then it seems like every single property owner ought to have the same right.

We also note that exclusion of Mr. O’Neil’s  “edge” property from the project would simply create a new “edge” property right next door. At the very least that property’s owner should have the same opportunity as Mr. O’Neil to have his property deleted from the expansion – thus creating another edge property!

This whole process of Redevelopment expansion, including both analysis and notification, seems to have been undertaken in an incredibly haphazard way. Who can say whether this was intentional. Not us. But we have our suspicions – as do a growing number of affected businesses and property owners.

The move will pave the way for The Fox Block  project– a proposed parking structure type development fronting on Chapman Avenue between Harbor Boulevard and the new McDonald’s which will resemble a McMiniature McSpanish McCastle.

Not everyone favored the deal,  longtime Fox critic, Councilman Jones opposed the deal, indicating that he was disappointed a big corporation like McDonald’s was not putting a nickle into the multimillion dollar burger deal.

“This is a huge cost of the citizens’ money,” Jones said.

Councilman Nelson asked if it were possible to postpone the final decision until the Fox Block developer, Arteco Partners, could come up with a plan and a feasibility study.

With nothing at stake and everything to gain, the out of town Developer’s spokesman Jerry Tessier said the new proposed parking structure and project would not work if McDonald’s stayed in its current location. Yet, he could not provide any guarantees for much.

Councilwoman Quirk agreed it was time to move forward. “We have the funds, and we need to get sales tax in.”

As a school teacher, Quirk must know what causes obesity in children; eating too much of the wrong kinds of food and not getting enough exercise. Now the kids wont have to walk as far to get their subsidized happy meal deals.

McDonald’s franchisee Mr. Frisbie reminded the Redevelopment Agency members that the City staff approached him to relocate his business, which was started by his father, James, in 1969 as a family business. A recent study shows the presence of an fastfood outlet within easy walking distance of a high school — about 530 feet or less — resulted in a 5.2% increase in the incidence of student obesity compared with the average for California youths, a correlation deemed “sizable” according to the findings. Great job Quirk, Bankhead and Keller!

“Our business is better suited where we are now,” Frisbie said. Dear Friends but another example that government is part of the problem and not the solution.