Tomorrow night hundreds of law-abiding citizens will be stopped and questioned at a Fullerton DUI/license checkpoint while a few dozen officers stand around drinking coffee and earning overtime pay. 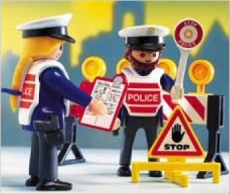 Unlike the previous checkpoint in May, the location of this one is being kept secret. If you want to know where the checkpoint will be, try hanging out at the local bars, where word of the location will spread immediately.

We’ve talked about how these checkpoints are extremely ineffective, nabbing only a couple of drunks while deploying a huge amount of police resources at our expense.

The police department has struggled to explain the lack of significant arrests, and has resorted to justifying the checkpoints as mere “safety education.” Our highly trained and well-compensated police officers have been reduced to handing out M.A.D.D. flyers in the middle of the street, one car at a time. That’s a task that could easily be done for free by M.A.D.D. volunteers in the bar parking lots. Of course, that approach wouldn’t be very lucrative for the police department.

These checkpoints are ineffective, invasive and expensive. It’s time to replace them with regular DUI patrols.