Okay, Friends, this draft fell out the back of the blog sock-drawer and I just rescued it. It’s a couple weeks old, but still germane, of course.

At last Tuesday’s meeting we expected some fun on the agenda item of who gets to be mayor, but boy did we underestimate the Council’s ability to entertain.

Of course Pam Keller was still sore about getting passed over by the “good old boys” in December and still wanted to kick the issue around. Apparently Pam and her Posse of Political Whatevers had been doing some lobbying behind the scenes, because at the end of issue the council collectively settled upon a “policy” approach that will rotate the mayor gig via seniority. And Dick Jones is next in line followed, finally by Keller, presumably in 2012. Unless Jones declines the honor or hits the road.

The proceedings included the usual incoherent ramblings and musings by some of our council favorites and of course a Fullerton City Council meeting wouldn’t be any fun without Don Bankhead re-inventing history and suddenly claiming he was for this “rotation” system all along (even though he was part of the deal to keep himself mayor two short months ago, and despite the fact that there has never, ever been any system of the kind).

In the end the promises don’t mean all that much. It still takes 3 votes to elect somebody mayor and by next fall there may be three brand-new council persons – some of whom may very well be disinclined to follow the “policy” set by their predecessors. On the other hand the mission of keeping Keller from running for re-election with the title “Mayor” has been accomplished by Ed Royce & Company. So maybe after 2010 nobody will care for another three years who the mayor is.

END_OF_DOCUMENT_TOKEN_TO_BE_REPLACED
Posted onJanuary 20, 2010January 21, 2010Dead heads
by admin12 Comments on The Stooge In The Middle
Dear Friends, we just received this fun post from a mutual Friend and I believe you will agree that it’s funny and pretty accurate. So enjoy. 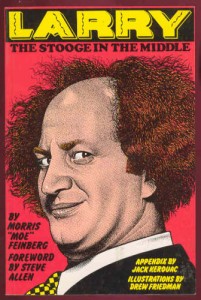 Several years ago Morris Feinberg penned a biography about his late brother Larry Fein entitled “Larry, The Stooge in the Middle”.  This clever and memorable title suggests a parallel to our own Fullerton City Council.

Twice a month first term Mayor Pro Tem Pam Keller takes her seat at the council dais between Dick “Moe” Jones and Don “Curley” Bankhead.  In recent months she has become the crucial third vote to approve some dubious Redevelopment projects.  No stranger to giving her stamp of approval to terrible developments like Amerige Court and Jefferson Commons, she is always careful to pepper the city staff with a few probing questions before throwing her support firmly behind it (“I got it Moe!”).  Lately, though, with Sharon Quirk-Silva withdrawing her support for boondoggles like the recently approved low income housing on Richman and the illegal Redevelopment expansion, and Shawn Nelson voting likewise against them or taking a powder entirely, Pam Keller has cast the deciding “yes”, taking her place as The Stooge in the Middle.

Larry Fein had a long stretch as a Stooge, but Pam Keller is up for re-election this year.  One has to assume that challenger Marty  Burbank has come to boot Pam aside to claim the mantle of middle Stooge for himself.  He has already signaled his worthiness of the title by shilling for the Chamber of Commerce in support of the aforementioned expansion of Fullerton’s Merged Redevelopment Area.  Of course, we don’t know what else Marty stands for, since the “Issues” page on his website is completely empty, but we don’t suppose he means to bump aside fellow Rotarian Bankhead, who will undoubtedly endorse the new would-be Larry.

There are some wild cards in play, however.  What if Shawn Nelson is elected as 4th District County Supervisor?  What if the rumors are true that Dick Jones plans to step down sometime this year?  There may be room for Shemp, and even Curley Joe to fill out the second half of as many as two council terms.  Then who will be The Stooge in the Middle?