We may have bid a fond adios to former City Manager, Joe Felz, but the mess he leaves behind still needs to be attended to.

The most timely issue is Fullerton Police Department personnel conduct in the Case of the Missing City Manager. The police on the scene of Joe’s Big Crash drove him home sans Breathalyzer test, and despite the fact that his vehicle had careened out of control and run over a parkway tree; and this after an evening of fun DTF libations and despite the fact that a cop on the scene smelled alcohol emanating from Joe. Did the cops follow their own rules? Or did they help their boss boss get away with a couple of crimes? From here, it looks pretty bad.

It’s been six weeks and nobody knows what’s being investigated. Or even if there’s any investigation at all.

What’s happening now? Certainly there’s no evidence of an internal investigation. Nothing more about the hiring of the mysterious “independent person.” And who really knows if anything got sent to the DA? Our city council (at least certain members) is in the dark, and so are we.

When the perps are about to get away, you gotta do what you gotta do.  Filing a personnel complaint initiates an internal investigation, or at least a pretend investigation, into the events of election night, just in case one doesn’t already exist. So one of the Friends decided to do just that. 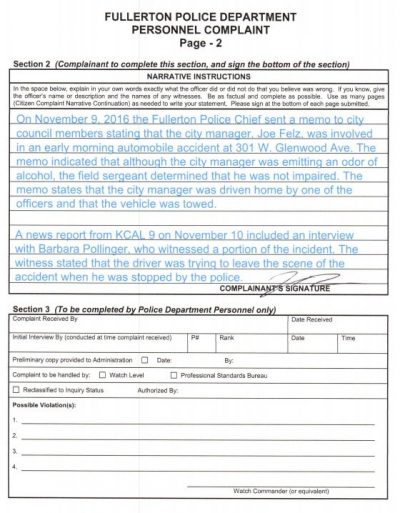 When the investigation is complete, this complaint entitles the filer to a letter from the Chief of Police indicating whether the finding was sustained or not sustained. That’s not much, but something is better than nothing.

10 Replies to “Getting to the Bottom of It”