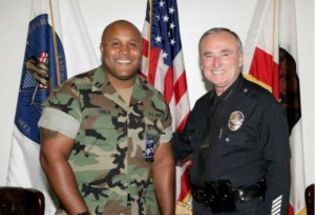 Christopher Jordan Dorner is on the loose. Heavily armed and with nothing to lose, this ex-LAPD cop is bent on deploying any means necessary to implement his “manifesto” of revenge on those he deems as dirty cops, and even their families.

So far three people are dead and Torrance cops have shot up two women in an incompetent case of mistaken identity.

While we may ponder the outcome of the current manhunt for this apparently deranged former police officer, it also behooves us to contemplate the means and methods that created and permitted Dorner’s cophood in the first place.

The LAPD is now quick to point out this guy’s history of nutsiness, and yet somehow Dorner was given access to training and weaponry in both the military and in the LAPD that are now being used effectively against civilians and the cops themselves.

How did that happen?

At FFFF we have offered a glimpse of the LAPD mindset in the personages of former Fullerton Police Chief Pat “Patdown” McKinley and his idol, LAPD Chief Darryl Gates. And we have seen an influx of LAPD cops and tactics into Fullerton since McKinley’s arrival in 1993 – current Police Chief Danny Hughes’ formative years, in fact.

Then there was the flurry of claims and allegations against FPD cops for brutality, culminating in the callous and lethal assaults on Veth Mam and Kelly Thomas in 2010 and 2011, caught on video.

It appears that in the police business potential violent instability is seen as less of a problem than a tool to be unleashed on an unruly citizenry.

All of which begs the questions: how hard is it to become an LAPD (or Fullerton) cop, particularly for ex-soldiers, and why in the world aren’t we weeding out the Christopher Dorners before they get a badge and a gun?

188 Replies to “Armed And Dangerous”