FULLERTON – A former Fullerton Police Department (FPD) officer has been charged with destroying evidence for crushing his audio-recorder after an inmate committed suicide in jail following a driving under the influence (DUI) arrest by the defendant. Vincent Thomas Mater, 41, is charged with one misdemeanor count of destruction of evidence and one misdemeanor count of vandalism. If convicted, he faces a maximum sentence of one year and six months in jail. Mater is scheduled to be arraigned March 26, 2012, at the North Justice Center in Fullerton. The Department is to be determined.

At the time of the crime, Mater was a police officer with FPD.

At approximately 9:45 p.m. on April 14, 2011, Mater is accused of conducting a DUI investigation after making a traffic stop of a vehicle being driven without its lights on in the dark. The defendant was in uniform and driving a marked FPD patrol car. Mater is accused arresting the driver, Dean Gochenour, upon determining that Gochenour was under the influence of alcohol.

Mater is accused of transporting Gochenour in in his patrol car to the Fullerton City Jail (FCJ) and turning him over to FPD jailers to be booked upon arrival. Throughout the duration of his contact with Gochenour, Mater is accused of wearing an FPD-issued Digital Audio Recording device (DAR), which was activated and would have audio-recorded any statements made by Mater or Gochenour.

At approximately 11:30 p.m., inmate Gochenour committed suicide by hanging himself in a cell at FCJ. The Orange County District Attorney’s Office (OCDA) was subsequently contacted to conduct the custodial death investigation.

FPD investigated the case against Mater regarding the destruction of evidence and submitted it to the OCDA for criminal prosecution.

To read the OCDA’s full report on the custodial death of Gochenour, visit www.OrangeCountyDA.com and select “OCDA Report Custodial Death Investigation – Inmate Dean Gochenour” from the Investigation Letters tab under the Media Center.  The report was issued today, March 13, 2012.

The DA’s letter describes the details of the event. 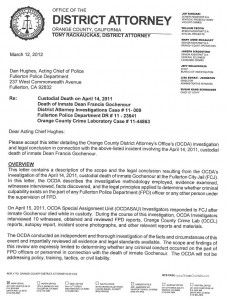