Guess what, Friends? Last month the City of Fullerton got sued again – stemming from an FPD incident in 2005. We have thoughtfully attached a copy of the complaint, below.

According to the complaint, some dude named Ernest Benefiel took some sleeping pills in a locked bedroom. Naturally, Benefiel fell asleep. His elderly father, concerned, called the paramedics because he thought his son was depressed. So far so good.

Unfortunately the paramedics called the good folks at the Fullerton Police Department who arrived on the scene, and because they learned that Benefiel owned a gun, decided to turn the place into some kind of hostage stand-off situation – even though there was no hostage. Some time elapsed and the cops, perhaps, became bored. To get Benefiel’s attention they deployed a flash grenade outside the guy’s window,  followed a dozen shotgun “bean bags” blasts through the same window. Benefiel was hit by one of the rounds and finally woke up from his pill-induced slumber; and, thinking he was under attack from criminals, fired a pistol shot out the window and hit a street sign.The cops then started blasting blindly into the room.

A while later Benfiel finally got his bearings and climbed out the window and surrendered peacefully – even though he had committed no crime.

Now you would think that upon mature reflection the cops’ superiors would have recognized how their out-of-control underlings unnecessarily escalated a pretty harmless situation into a SWAT stand off, and just let the whole thing go. But no! The cops and the DA decided to prosecute Benefiel for firing on a police officer. In fact, they tried him twice, and each time the case was overturned on appeal.

Meantime, Benefiel had spent over five years in jail for the heinous act of simply defending himself. And now the taxpayers of Fullerton are staring at yet another FPD civil suit settlement. 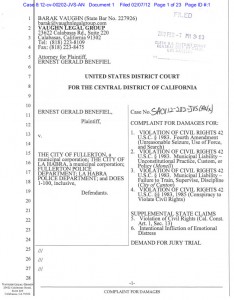 If you read the complaint you will notice an inescapable fact: according to a police training expert FPD tactics violated procedure on the use of the flash grenade, the shot gun bean bags, and blindly shooting projectiles.

And who was boss of the FPD at the time and supposedly accountable for the actions of his boys? That’s right. Former Chief and current councilman Pat McKinley.

Fortunately we can help make sure this incompetent clown is not around after June 5th to vote for anymore settlements that would hush up embarrassing revelations about the Culture of Corruption he created while head of the Fullerton Police Department.