OC Register excuse for a journalist, and notorious bad-cop-story-misser, Lou Ponsi, really outdid himself today with a ridiculous “story” about all the excuses his pals on the force heard from folks who wanted to dodge a traffic citation. Real tough, hard-hitting piece there, Lou.

I wonder if Ponzi will ever tire of writing stupid fluff pieces for one of the most notorious police forces in California. I also wonder if writing salacious cop-accounts of wanton females is the best story line, given the well-documented behavior of FPD serial sex batterer Albert Rincon, whose activities were essentially known, and condoned by the department.

Anyhoo, that’s all introductory to my own version of a real human interest piece, something of which we are all too familiar, by now. And that’s the excuses doled out by the cops themselves to try to explain away their own malfeasance – crap subsequently sucked up by drones like Ponsi. Enjoy. 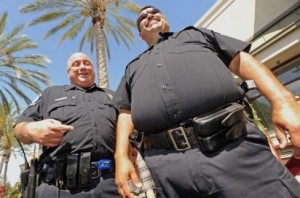 3. He disobeyed a legal command.

4. He was reaching for his “waistband” (whatever that is).

5. That donut was supposed to be jelly-filled.

6. We put our lives on the line every day.

9. We try to arrest the right guy.

10. He thought he was beating up the right guy.

12. It was not just honking. It was excessive horning.

13. No, it’s not tax deductible, but give us your money anyway, you’ll get a decal.

14. The job stress hooked me on those pills.

15. I just set my bag of chicken on that iPad. After that I don’t know what happened.

16. I got mad at my DAR and smashed it against the wall.

17. We slammed his head against the bars as we removed the dead body.

20. There were broken bones.

21. There was only one, maybe two deeply involved.

22. He was breaking into cars.

29. The free sandwiches and beers are just a small perk for an otherwise unrewarding job.

30. My second wife doesn’t understand me and my girlfriend just wants a chunk of that pension.

33. It was just a bong from the evidence room. It’s not like i was going to use it or anything.

34. Once you take a guided tour of the station you’ll feel differently about everything.

35. it was really all just a misunderstanding.

36. They are either misinformed or lying.

And now, feel free to add your own.