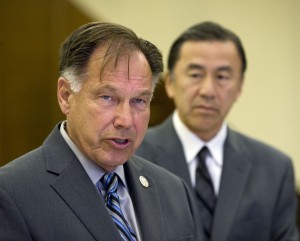 I’ve been thinking about this for months. It’s been gnawing at my spinal cortex. It’s been chewing on my psyche. It’s been snag-toothing the back of my brain. There is no polite way to put this. OC District Attorney Tony Rackauckas’ case against the goons who killed Kelly Thomas is designed to fail.

There are just too many lose ends overlooked or ignored by the DA. Too many unasked questions. Charges that are mystifying, flimsy, dubious, ultimately useless. 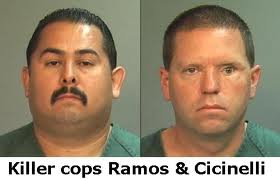 If ever anybody looked like a patsy it was the obese clown Manny Ramos, who, as Rackauckas pointed out,  initiated the brutal contact with the schizophrenic, undernourished homeless man.  But other than possibly joining the pile on, Ramos is not said by the DA to have been part of the actual beating laid down on Thomas. That was said to have been perpetrated principally by the one-eyed cop Jay Cicinelli, who was hit with paltry charges and a paltry bail.

The Second Degree murder charge against Ramos won’t stick since his lawyer need only point to the damage done by the other cops, four of whom have already been exonerated of any crime by the DA. And Cicinelli’s lawyer will argue that a cop tasering and beating a man’s face into his brain case is not to be considered excessive force by an OC jury, let alone manslaughter, since it never has in the past.

Joe Wolfe, whom we are supposed to believe had no knowledge of what was going on between Kelly and Ramos, a mere 15-20 feet away, and who actually delivered the first blow – a swing of the baton to Thomas’ leg, and who immediately piled on, was inexplicably given a pass by Rackauckas. Is it too conspiratorial to propose the possibility that Wolfe was actually waiting for Kelly to run away from Ramos? How long does it take to search a backpack?

And then there’s Kenton Hampton, whose thuggery has been well-documented on these pages; who arrived on the scene in time to hold down Kelly’s legs as he was being tortured and beaten by Cicinelli. He got a get out of jail card from our DA, too. So did Blatney and Craig, arriving on the scene to participate in the mop up operation, and possibly in phone/film collection activities.

Will the DA even bother going after Ramos anymore? With the preliminary hearing scheduled for March 28th, I wouldn’t be surprised if charges will be dropped, maybe even the charges against Cicinelli, as well.  Could Wolfe or Hampton still be charged if the DA has second thoughts about his strategy, and assuming he actually wants to convict somebody of something in this killing? Yes, it’s possible, but not very likely.

I’m starting to think the whole thing was just an elaborate whitewash of a conspiracy; a charade in which a weak DA ostensibly succumbed to public pressure, but never had any intention of vigorously prosecuting any cops. If so we are all in deeper trouble than we can possibly appreciate. I hope I am wrong.

And I hope if I am not wrong that Federal and civil trials will bring to light all of the information our Do-Nothing DA, by his action, or lack of action, seems intent on not disclosing.

337 Replies to “Born To Lose: The Do-Nothing DA’s Recipe For Failure”