FullertonStories.com just published this letter from councilmember Bruce Whitaker, in which he demands that the video and audio recordings of the July 5th police beating of Kelly Thomas be released to the public. 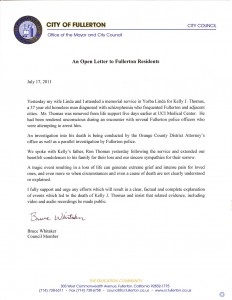 Don’t forget to check out the printed responses of the other councilmembers, including McKinley who says “I disagree with that last sentence about releasing the video.  It isn’t a wise thing to do and is for the authorities to do.”

What does that mean?