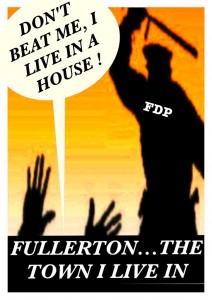 We all know why the right leaning Bushala blog, Friends for Fullerton’s Future and KFI radio hosts Jon & Ken are capitalizing on the murder of Kelly Thomas, and that is because, at least in part, they hate the police unions. Regardless of their motives, they are correct on this issue, and they, unlike you, are bringing attention to it. With the exception of current councilperson Sharon Quirk-Silva, who was the first to ask for resignations, and a well respected CSUF Professor, who have seen at the protest, so many of you established liberals, have an almost disinterest in the killing of a homeless man. The question is: Why? You are the royal opposition in this Republican demographic, we count on you, and yet on this one you decided to stay home.

Work demands have prevented me from hanging out with you lately, so please forgive me if I am wrong, but I’m not detecting any outrage at the actions of the police from most of you. I usually turn to you for leadership on a dozen other issues, but I don’t see that leadership here. I’m sure you are upset, but what seems to upset you the most is the fear that things will get disorderly, or that Fullerton’s image is soiled; not that one of the most vulnerable members of our community was killed by having his face beaten into hamburger by six of our police officers. I understand that you did your demo stuff in the sixties and that you still hate Nixon, but that check’s been cashed. I also understand that outrage on its own does not effect change, but sometimes an incident is so vile and so brutal, that to my mind one can’t help but get emotional about it. I’ve been to all but one of the protests in front of the police station and all of the council meetings since the killing.  I’ve looked for you and wanted to say hello. Where were you?

Long before we came creeping up your north Fullerton hills and joined you in the nicely paved part of town, my wife and I rented an apartment atop one of the downtown shops on Wilshire Boulevard. As someone who still spends a lot of time downtown, and someone who does not take a wide berth of the homeless, I was acquainted with Kelly Thomas. After the homicide, the story that was spun about Kelly by city officials was downright ridiculous to everyone that knew him. What the police did not count on in this case was that his father was a former sheriff, or that Kelly was not just another eyesore. Kelly was actually liked by many in the downtown community. I tell you this only because you do your mingling at backyard fundraisers on Skyline Drive and in this part of town people like Kelly Thomas could not walk two blocks before someone’s maid was told to call the cops.

There are some left-leaning Fullerton residents like Jesse LaTour and Jane Rand, who are present in the Justice for Kelly movement, but you consider these folks to be too fringe to support anyway don’t you? The votes from the last election show that many of you opted for Bankhead. In light of this I would now argue that most of you are not really liberals, progressives or leftists anyway; you are just pro-bedroom community.  After everything the police and city officials have done here, you are more comfortable advocating for bike paths, making sure your neighbors have period appropriate door knobs, and attempting to prevent development. I like bike paths, and I don’t want 760 homes built in Coyote Hills either, but that spying on your neighbor’s stuff in search of historical inaccuracies is a bourgeois wank. These things need to take a back seat while our city is still in the shadow of a murder and an ongoing, official stonewall. I’m an environmentalist, but if I was in Birmingham Alabama in 1963 after four little girls were blown to bits because of the color of their skin, my efforts to clean up the local swimming hole would have taken a back seat to my demands for justice. I suggest you do the same.

As a reminder this is why the actions of at least six of our police officers, and any number of city officials, is worthy of your usual scorn and attention:

Kelly Thomas was most likely murdered for being confused. His confusion was perceived as disrespect and non compliance, and six giant dimwitted egos with clubs and badges lost control. Why does this not upset you? Why does this no longer resonate with you? Which of the following best describes the reason for your inaction?

a)       The Fox news crowd was correct about you. Too many of you liberals are, in fact, elitist. If you are asked to compost your refuse, or to donate to the library, you are on board. If, however, you are asked to stand in the sun and risk offending powerful and armed individuals that police our community, it’s best that we remain calm and wait for the authorities to get to the bottom of it.

b)       You are white and mostly affluent. The police have always called you sir and madam, and you would prefer that we sacrifice a few dingy homeless to the nightstick than have Fullerton perceived as a safe haven for the homeless.

c)       You are cowards. It’s one thing to try to regulate the actions of some jerky developers with hideous Miami Mansion dreams bouncing around in their greedy heads, but it’s another to stand in front of armed police officers and demand that they do the right thing.

e)       And finally – no issue, apparently even police corruption and the murder of an unarmed skinny homeless man, would dare allow you, my fellow privileged Fullerton liberals, to ever be on the same side of an issue as an opportunist like Tony Bushala.

My hope is that after checking off one or more of the above, that you do a little reflecting and then come join the rest of us, of all political stripes, in front of the Police Station and in council chambers for Kelly Thomas.  You may find that demanding justice for those who normally do not have a voice is just like riding a bike.

In the past I have had very little love for FFFF,  as I feel that this blog is equal parts, reward/vendetta, as it is political advocacy.  This time, however, we are on the same side, and I greatly appreciate the continue attention that FFFF is bringing to Kelly’s Thomas’s brutal beating and murder. I am happy to stand side by side with anyone who wants those responsible for Kelly’s murder as well as the subsequent obstruction by city officials, to be held accountable. For me at least this rises above politics. In this instance I would like to say KEEP UP THE GOOD WORK.

162 Replies to “Open Letter to My Fellow Fullerton Liberals, by Steve Baxter”