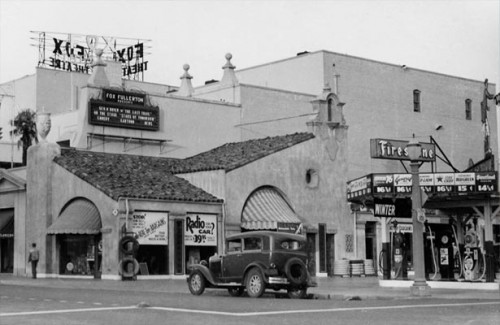 Ever since the City of  Fullerton climbed aboard the “Save the Fox” bandwagon, something was just plain wrong.  Somehow the redevelopment bureaucrats inculcated into the public mindset the story that the only way the Fox could be “saved” was by appending it to another massive downtown housing project. To facilitate the latter the city had to relocate a fast food franchise; to accomplish that they had to buy up property on Pomona Ave. at exorbitant prices.

And so the initial make work myth has created a cascade of expensive, almost comical decisions by the city council.

Why was the linkage between the Fox and a new project a quote “myth”? Let’s apply some common sense to the issue. It was assumed (correctly) that the theater was going to require massive subsidy to restore and to operate; but somehow the city believed this loss could be rolled into a larger, profitable project by some private developer, or to be more precise, the city staff believed they could sell this bag of magic beans to the public. Three city council members (Don Bankhead, Pam Keller and Sharon Quirk) are still waiting for the beanstalk to grow.

There is no logical connection between restoring the Fox and the development of any new project! The fact is that whoever developed this “project” will receive massive subsidies from the Redevelopment Agency which will cover the cost of the Fox, developers do not do anything for free.

And so why doesn’t the city at least be honest: come out and acknowledge the cost of restoring and operating the Fox-and if it is deemed a worthy municipal value grant the money directly to saving the Fox. Or better yet why not let the people vote on weather or not to create a permanent Fox restoration and operations budget? Honesty and transparency. Two other civic values.

7 Replies to “Time to “Rethink” The Fox”