Without comment (for now), and with emphasis and typing as originally delivered, I present a letter that was delivered from Anonymous City Staff; 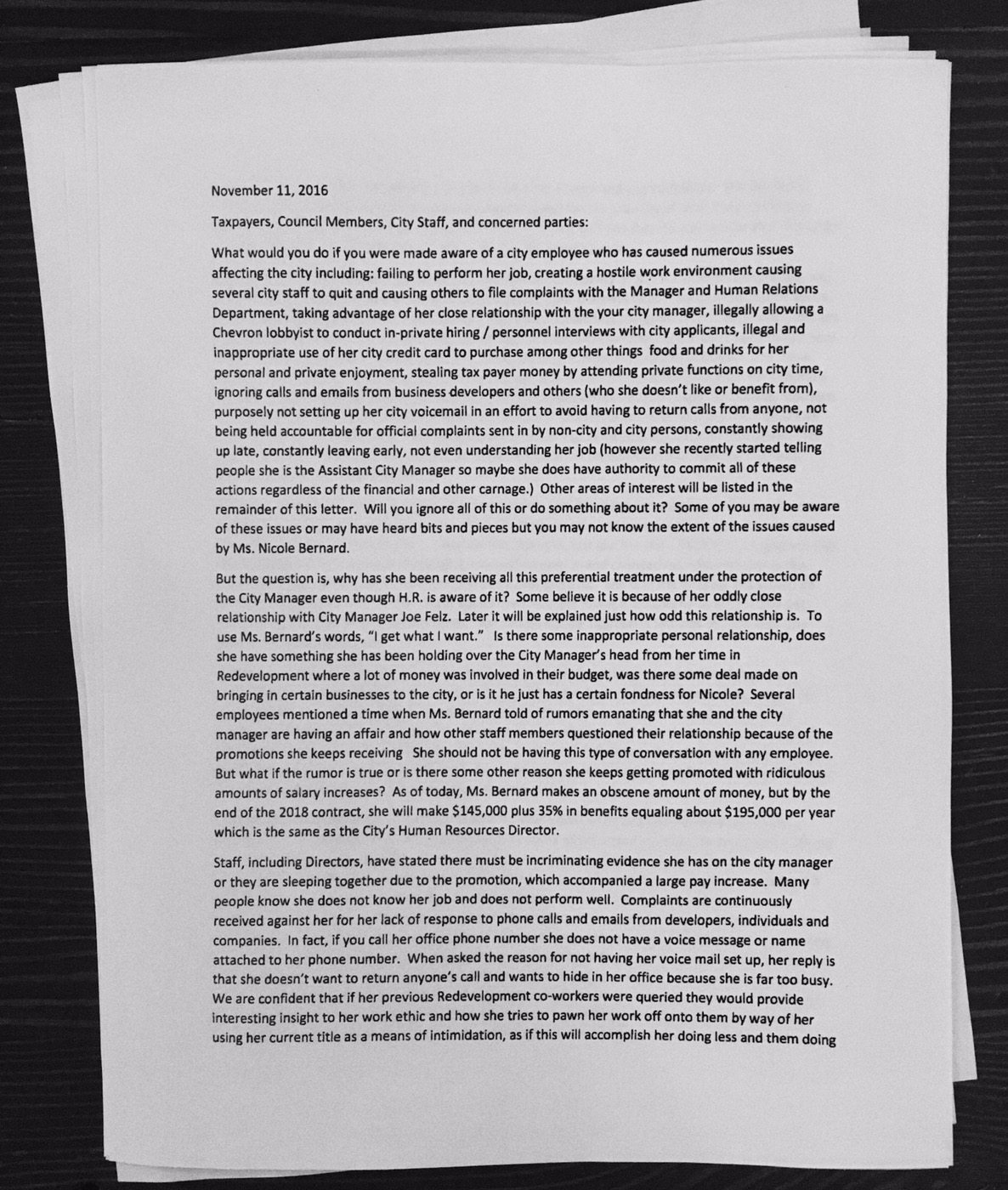 What would you do if you were made aware of a city employee who has caused numerous issues affecting the city including: failing to perform her job, creating a hostile work environment causing several city staff to quit and causing others to file complaints with the Manager and Human Relations Department, taking advantage of her close relationship with the your city manager, illegally allowing a Chevron lobbyist to conduct in-private hiring / personnel interviews with city applicants, illegal and inappropriate use of her city credit card to purchase among other things food and drinks for her personal and private enjoyment, stealing tax payer money by attending private functions on city time, ignoring calls and emails from business ·developers and others (who she doesn’t like or benefit from), purposely not setting up her city voicemail in an effort to avoid having to return calls from anyone, not being held accountable for official complaints sent in by non-city and city persons, constantly showing up late, constantly leaving early, not even understanding her job (however she recently started telling people she is the Assistant City Manager so maybe she does have authority to commit all of these actions regardless of the financial and other carnage.) Other areas of interest will be listed in the remainder of this letter. Will you ignore all of this or do something about it? Some of you may be aware of these issues or may have heard bits and pieces but you may not know the extent of the issues caused by Ms. Nicole Bernard.

But the question is, why has she been receiving all this preferential treatment under the protection of the City Manager even though H.R. is aware of it? Some believe it is because of her oddly close relationship with City Manager Joe Felz. Later it will be explained just how odd this relationship is. To use Ms. Bernard’s words, “I get what I want.” Is there some inappropriate personal relationship, does she have something she has been holding over the City Manager’s head from her time in Redevelopment where a lot of money was involved in their budget, was there some deal made on bringing in certain businesses to the city, or is it he just has a certain fondness for Nicole? Several employees mentioned a time when Ms. Bernard told of rumors emanating that she and the city manager are having an affair and how other staff members questioned their relationship because of the promotions she keeps receiving She should not be having this type of conversation with any employee. But what if the rumor is true or is there some other reason she keeps getting promoted with ridiculous amounts of salary increases? As of today, Ms. Bernard makes an obscene amount of money, but by the end of the 2018 contract, she will make $145,000 plus 35% in benefits equaling about $195,000 per year which is the same as the City’s Human Resources Director.

Staff, including Directors, have stated there must be incriminating evidence she has on the city manager or they are sleeping together due to the promotion, which accompanied a large pay increase. Many people know she does not know her job and does not perform well. Complaints are continuously received against her for her lack of response to phone calls and emails from developers, individuals and companies. In fact, if you call her office phone number she does not have a voice message or name attached to her phone number. When asked the reason for not having her voice mail set up, her reply is that she doesn’t want to return anyone’s call and wants to hide in her office because she is far too busy. We are confident that if her previous Redevelopment co-workers were queried they would provide interesting insight to her work ethic and how she tries to pawn her work off onto them by way of her using her current title as a means of intimidation, as if this will accomplish her doing less and them doing more. This is poor customer service and a tactic to avoid people and accountability. She shirks her responsibilities. Her co-workers are unjustly compensated for the quantity of work they perform in comparison to her. Each can easily outperform her and do it well but they do not receive their fair share of compensation. She receives much more, very unfair and disparate.

She has stated that she caters specifically to the Korean community as this is Fullerton’s future and she will devote as much as she needs in order to bring their business to the city because that is where the money is and, “that’s what she is about.” She stated something along the line, “…they (Koreans) get the vip treatment from me but don’t get me wrong I am not a Korean lover and I don’t have to live here so I don’t care how many of them come in”. Is this the way Fullerton conducts business? Are there preferred ethnicities for city services? This sounds quite discriminatory and coming from an individual who has their own personal agenda. Oddly, since her latest promotion as Assistant to the City Manager or as Ms. Bernard puts it to outside colleagues, “Assistant City Manager”, she chooses the ethnicities that seem most lucrative but for her personal gain. She brings in Korean businesses, is recognized for this one portion of her job, and receives an obscene salary. So on one hand she uses the business owners but does not like Koreans?