When you are a moral vacuum like Dick Ackerman, you really don’t stand for much of anything except your own well-being. Public service? Hell, no! It’s all about personal service. Everything else is just platitudes and bull shit.

An indication of Mr. Ackerman’s future career path was clearly established with the creation of a fake charity by his wife that was simply a mechanism to get state legislators (one of whom was Mr. Ackerman) alone on Maui with lobbyists for big corporate interests who actually paid for the whole junket. Ackerman is hilariously quoted as saying how beneficial these get togethers were, as if being lobbied in Sacramento (instead of Hawaii by the same cast of characters) was somehow just so much more darned inefficient. FFFF posted all about the utterly phony Pacific Policy Research Foundation, here.

That was just the start of Mr. Ackerman exploiting Mrs. Ackerman for family gain. And it wasn’t enough that The Dickster got the missus on the Metropolitan Water Board where she naturally supported huge water rate increases (true, that bar was already set really, really low).

In the summer of 2009, while The Dick was illegally lobbying the State Legislature in the sordid the OC Fair Swindle, his protege, 72nd  District Assemblyman Mike Duvall was caught bragging of nasty sexual accomplishments with a lobbyist; maybe the idea of nasty accomplishments with lobbyists ignited a fire in Dick’s political loins. By the end of September his wife, Linda Ackerwoman was running to replace the disgraced Duvall! 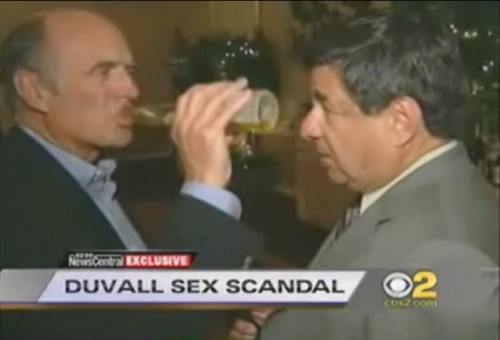 Now people endowed with a normal dose of shame would have simply receded into the background after the man they promoted was busted for moral turpitude. But the Ackermans are not so endowed. Dick’s immediate impulse was to promote the candidacy of the wife, a woman who had, apparently, never even held a job except as a “consultant” raiding her husband’s campaign accounts.

So Dick and Linda cooked up a fake address in the rumpus room of a Fullerton stooge. Well, technically they were carpetbaggers; but since nobody really believed they spent a night living in Fullerton a better word applies: fraud.

As expected, Mrs. Ackerwoman got the endorsements of the Three Deteriorating Dinosaurs, all the statewide Redevelopment money, and the big corporate interest lobbyists. They ran one of the slimiest campaign anybody could remember. It hardly mattered. The Ackermans still lost to Chris Norby by a whopping 20 points in the Republican Primary. Within a few weeks they had reregistered to vote in the leafy precincts where their Irvine mini-McMansion is located. How’s that for a big F-you, Fullerton?

The point of the story is simple:  there is no basement so low that Dick Ackerman & Co. won’t crawl into it in order to pull a string or make a buck. And if you don’t recognize Dick as the moral barometer of the anti-recall campaign, you don’t know Dick.